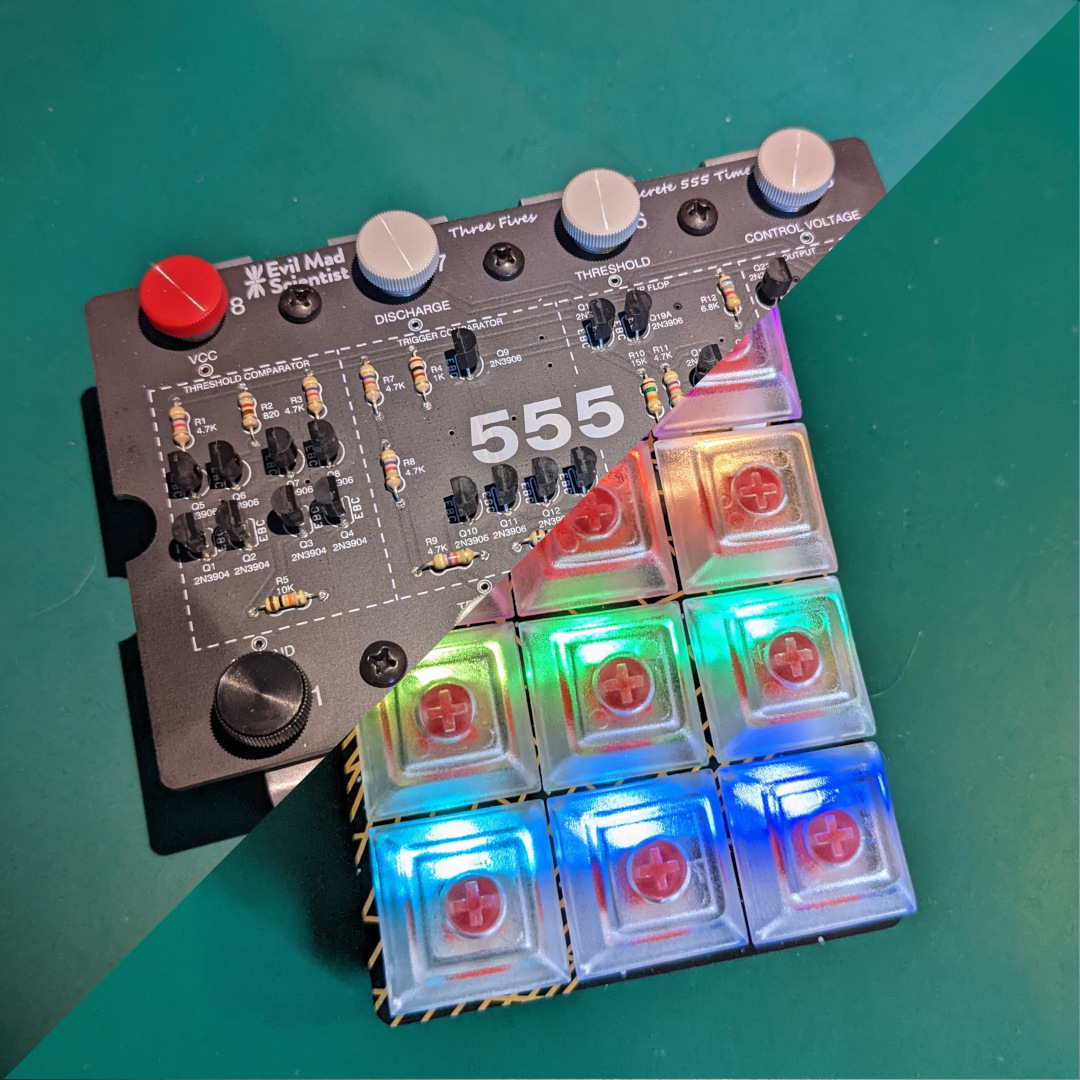 I have a number of other projects in flight right now, but sometimes it’s nice to just take a break and fabricate something fun. So when I was getting together an Adafruit order recently I decided to grab myself a couple of kits to play with. No hardware design required, just fabrication (and a little programming in the case of the macropad) and fun!

Fabrication might even be a bit of a stretch for the first kit: an Adafruit Macropad RP2040. The whole thing pretty much snaps and screws together without a fuss. It’s powered by an RP2040 chip and programmable entirely in CircuitPython. It’s got a lovely 128x64 monochrome OLED display, a rotary encoder, and 12 keys lit with individually addressable NeoPixels.

NeoPixel keys doing a rainbow cycle; macropad set up as a numpad 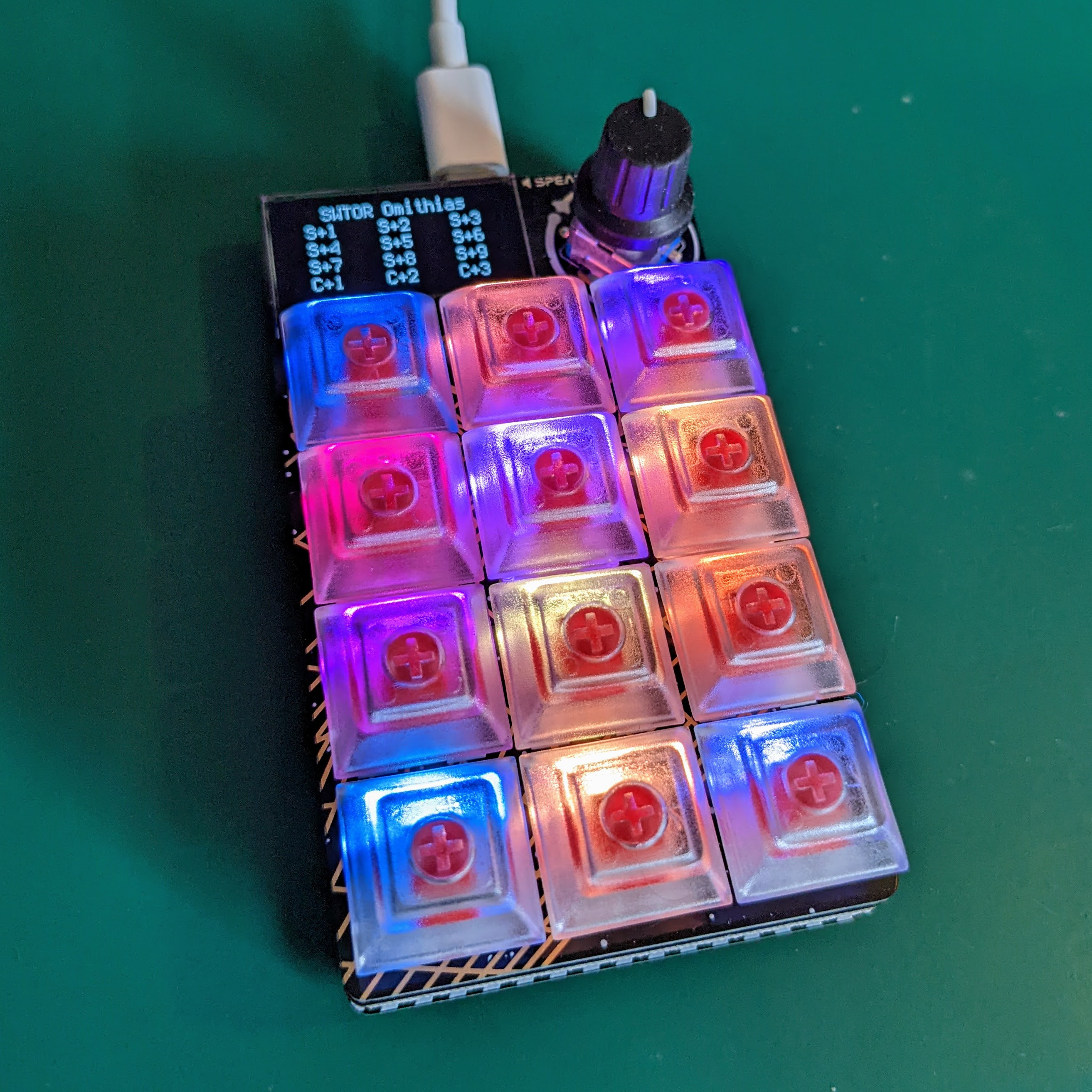 Set up for one of my SWTOR character. The key colors match the colors of the bound skills.

The second kit is the real gem though. I’ve had my eye on this giant “Three Fives” Discrete 555 Timer Kit for quite a while now. The 555 timer has a long and storied history in electronics and shows up just about everywhere. Normally they’re quite tiny, of course, but this kit has you building a fully functional 555 out of discrete components at a much more human scale. It’s a great look inside the 555 and goes very well with my current theme of transistor logic which I’ll talk much more about in a later project post. Also, it’s darned cute! 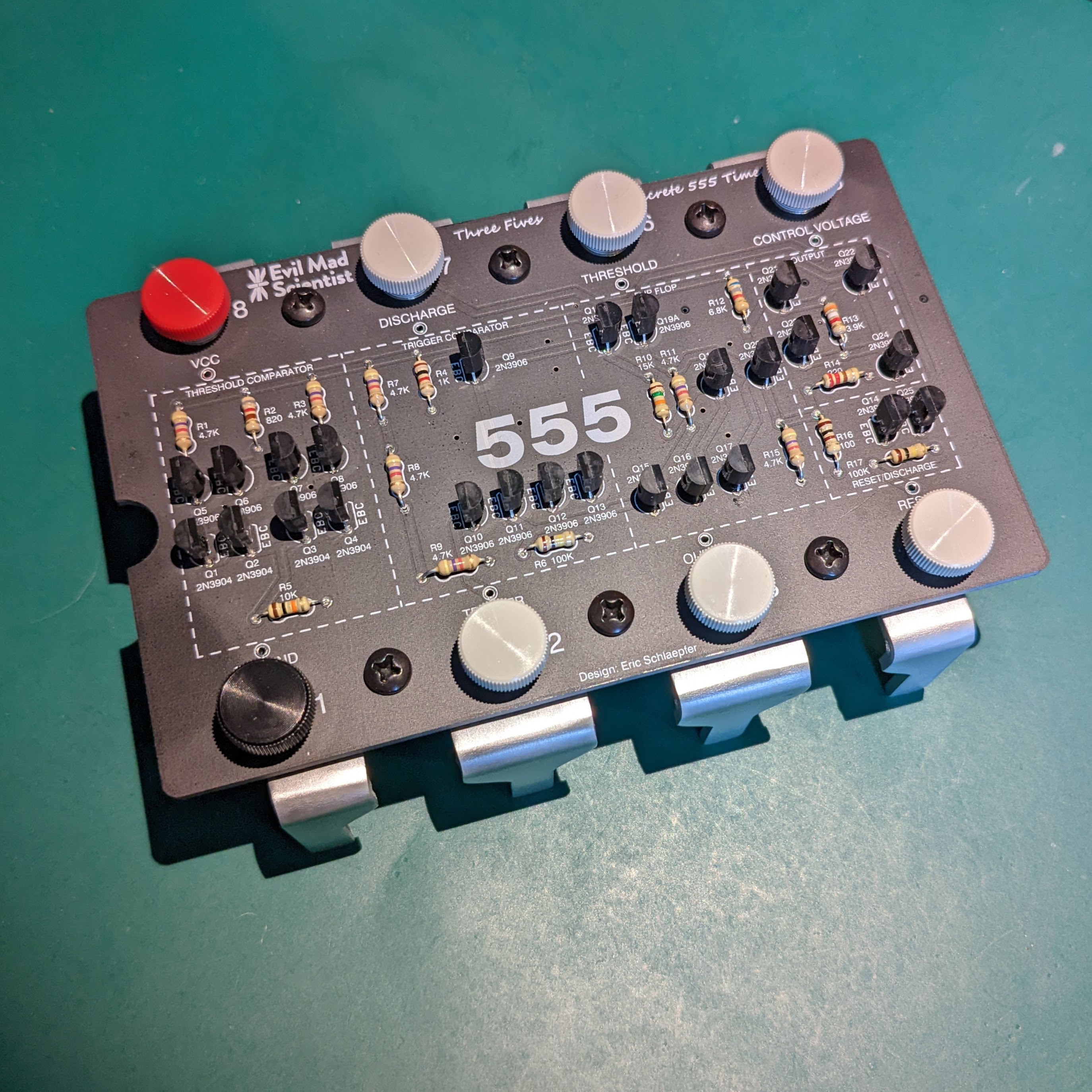 The pins are just for show, but the circuit works and can be connected to via the thumbscrews 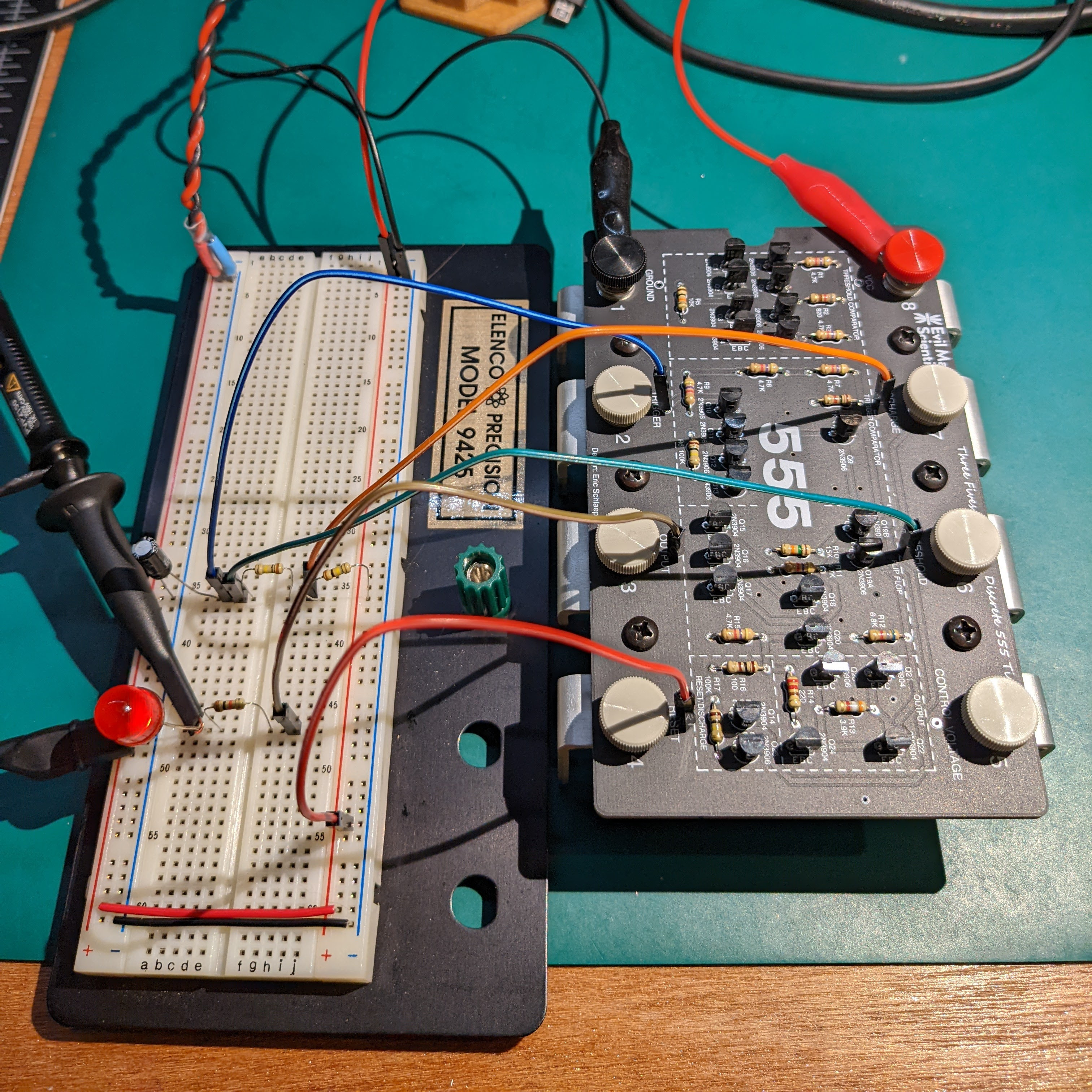 A very simple flashing LED circuit driven by the 555 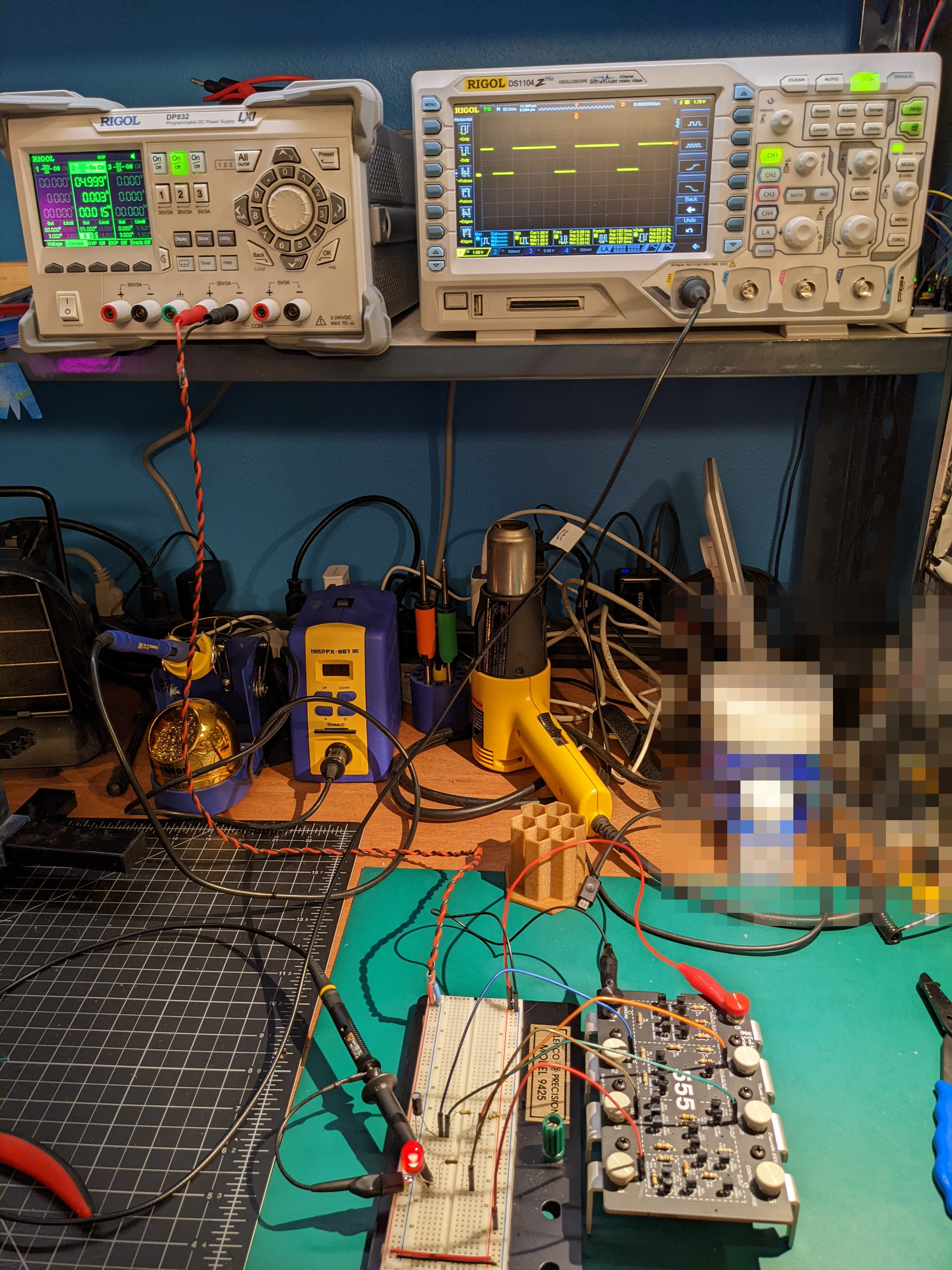 Look at that lovely, clean square wave. It worked on the first try, which is very much a kit experience!

These kits were a bit of quick fun and I’m even getting good use out of the macropad. Building them skipped the entire design (and learning) part of electronics, which is what I’m usually the most interested in, but they made for a relaxing afternoon or two.