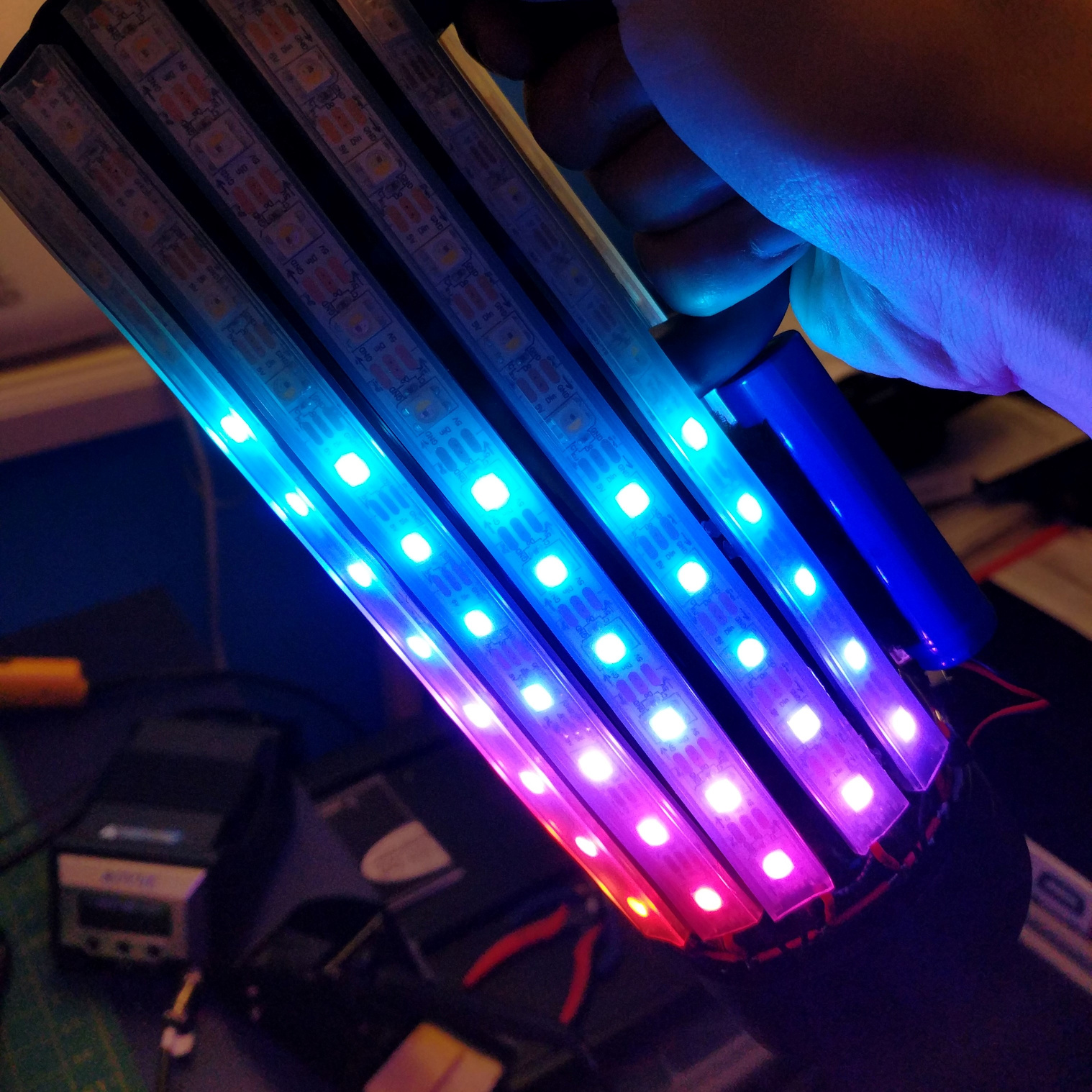 I needed a light source for nights wandering around CriticalNW but I didn’t want to get locked into a single costume piece I’d have to wear every time I needed some glow. Finally I realized that I always have my waterbottle with me, which made it the perfect candidate for my new glow toy. After that it just seemed natural to get it running a simple fluid simulation.

The best part is that under all the electonrics and flash, it’s still my favorite water bottle and still very functional. 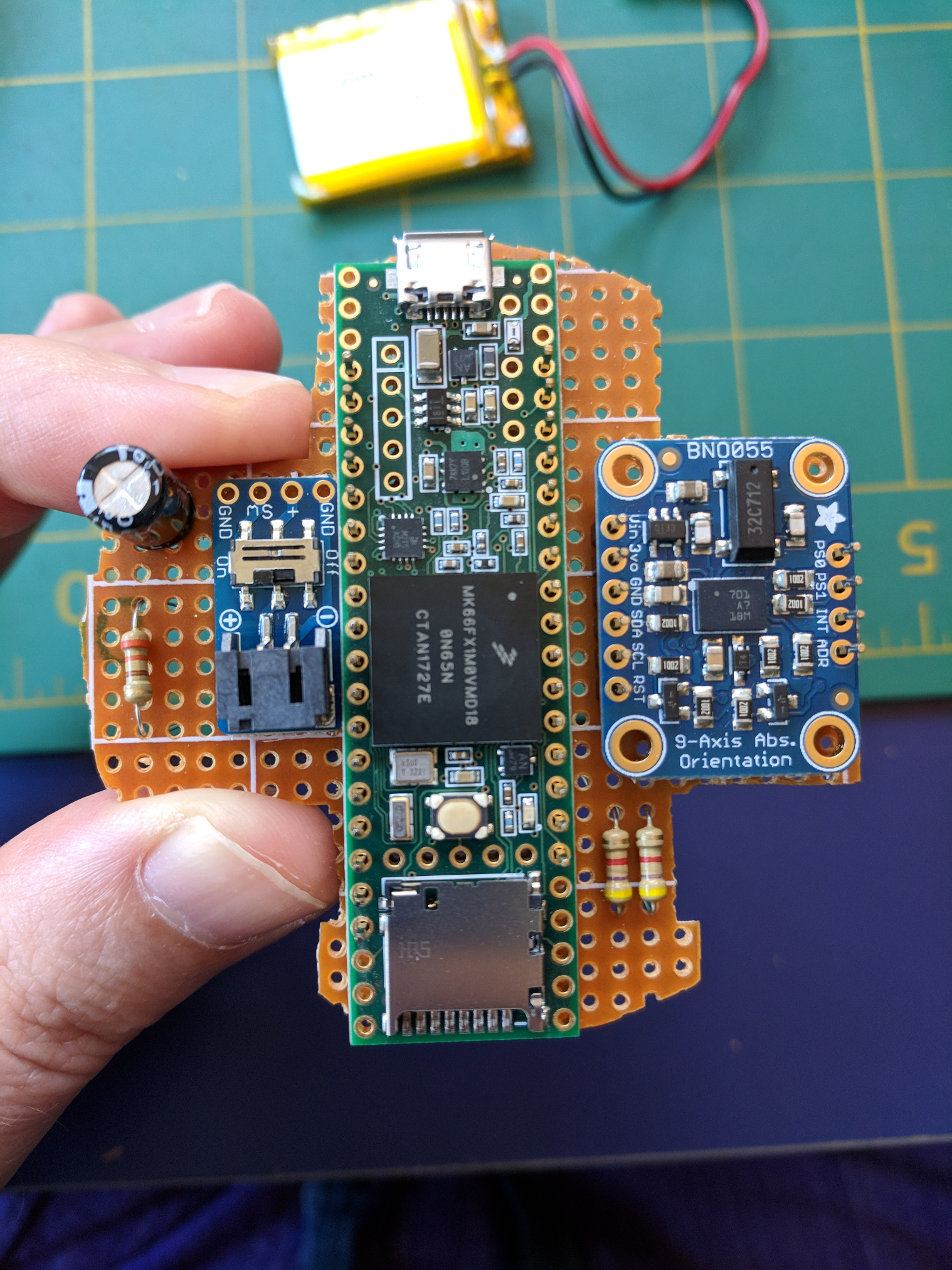 Test layout of the components 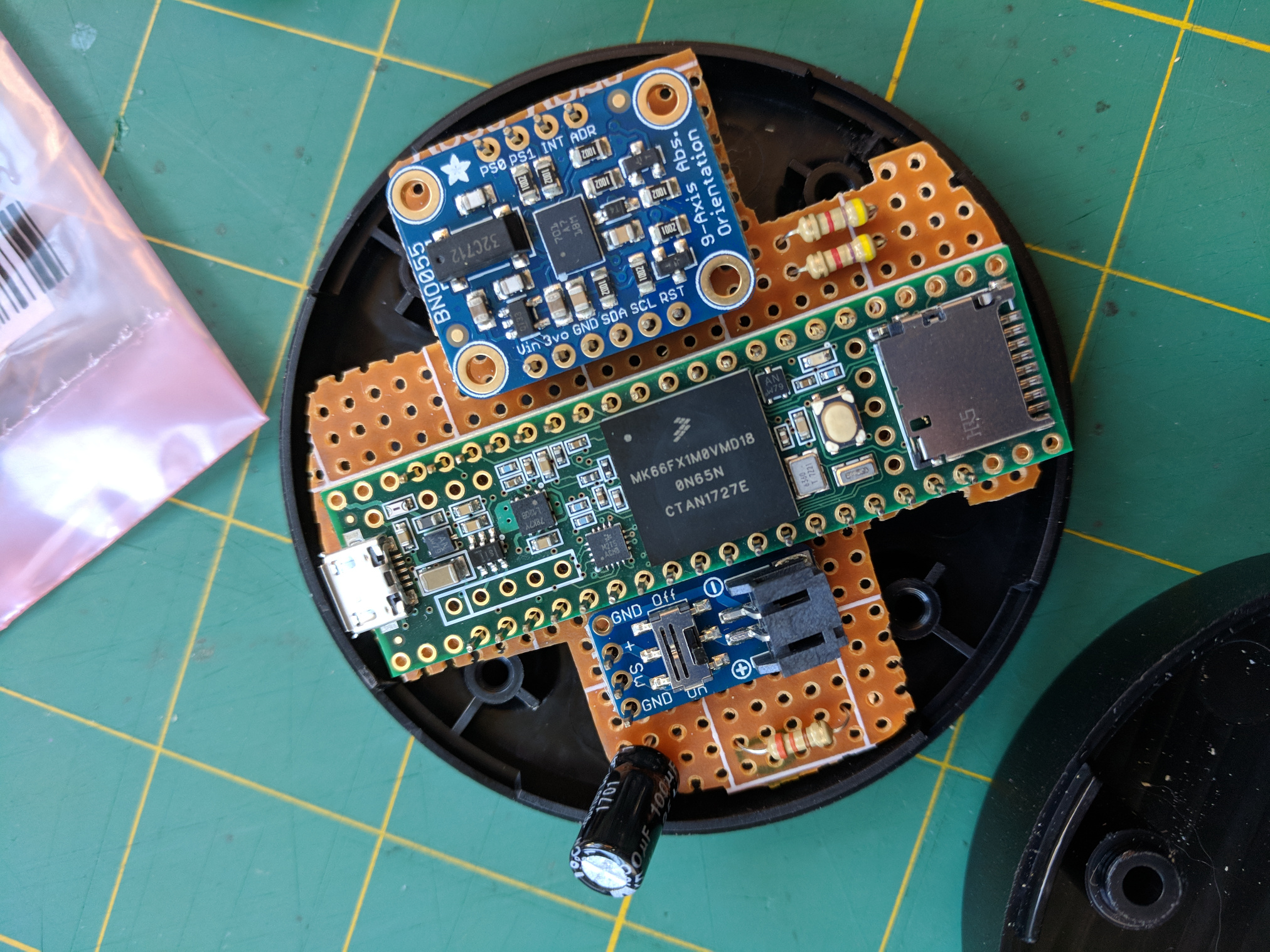 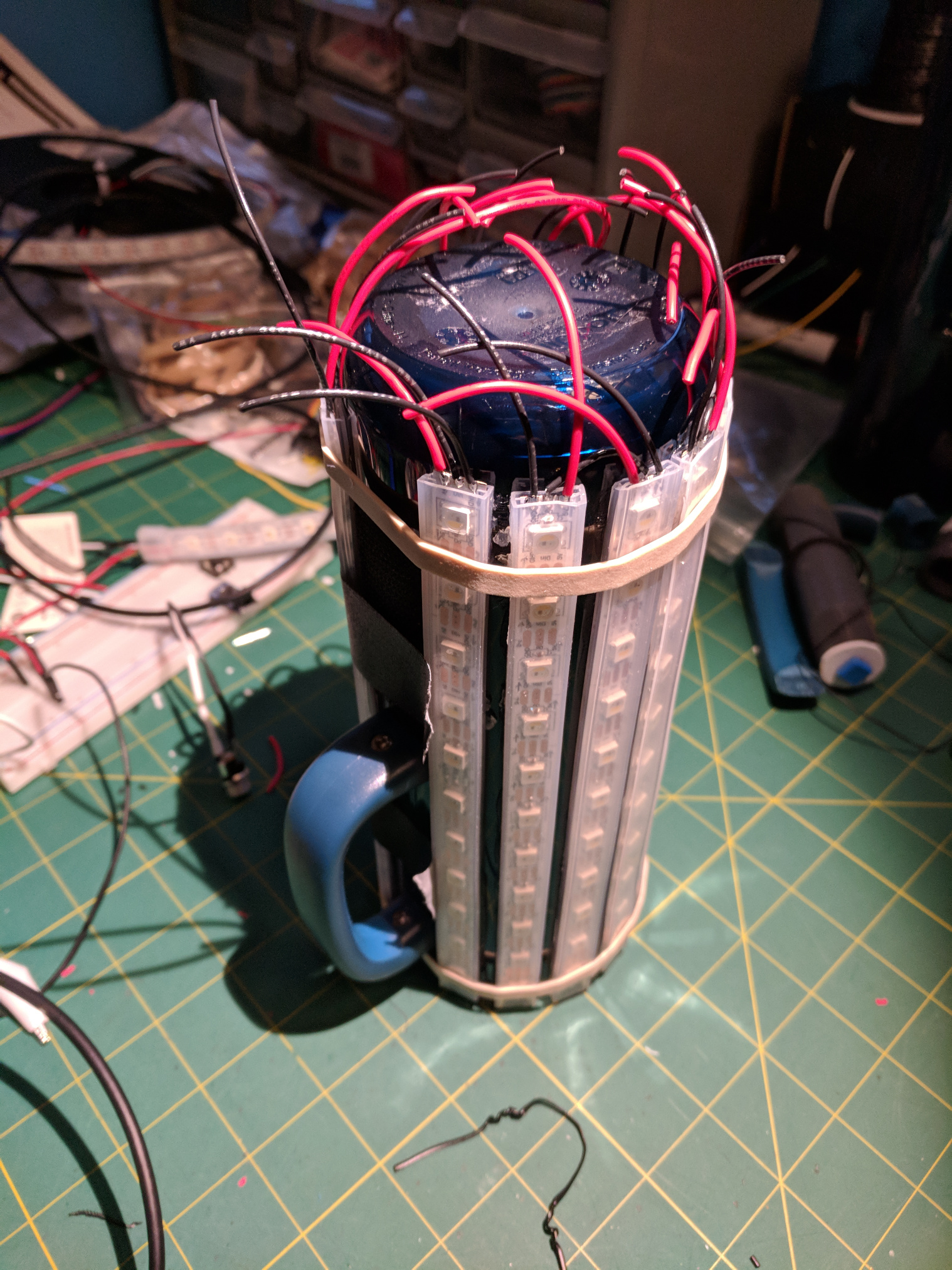 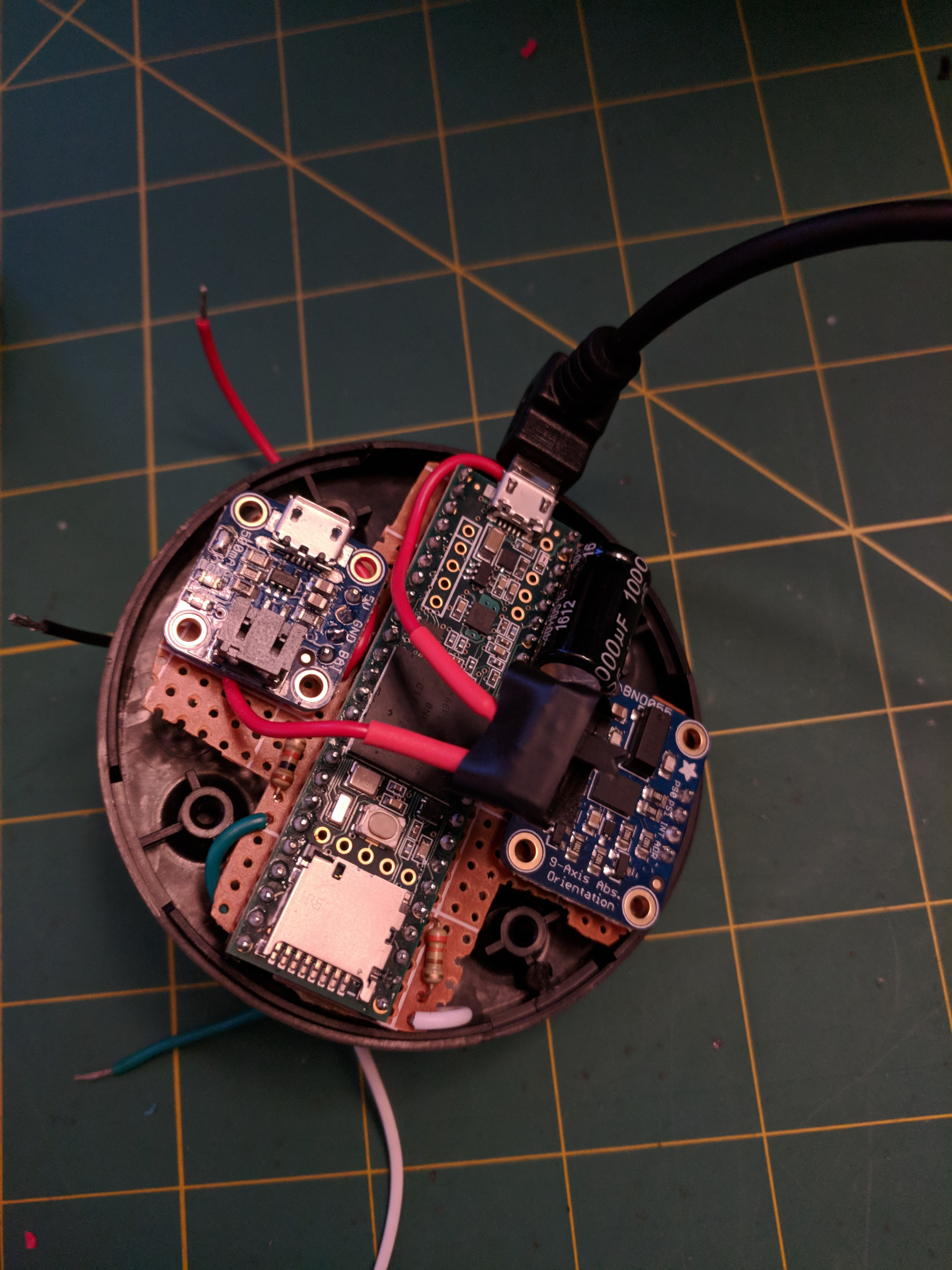 Mounted, now with an integrated charger

The enclosure is attached with gap filling CA. I used hot melt to seal (as best I could) the open ends of the Neopixel strips and wire holes in the enclosure. I didn’t have a good solution for the batter lead that didn’t impair my ability to remove or swap the battery, so I just hoped for the best and started thinking about Mk 2.

The battery is attached with velcro as I couldn’t fabricate a handle replacement to conceal it in time. Another Mk 2 list item.

There’s a single external button for controlling the electronics. A click changes mode. A long hold adjusts brightness, and a very long hold (5 seconds) puts the water bottle to sleep. 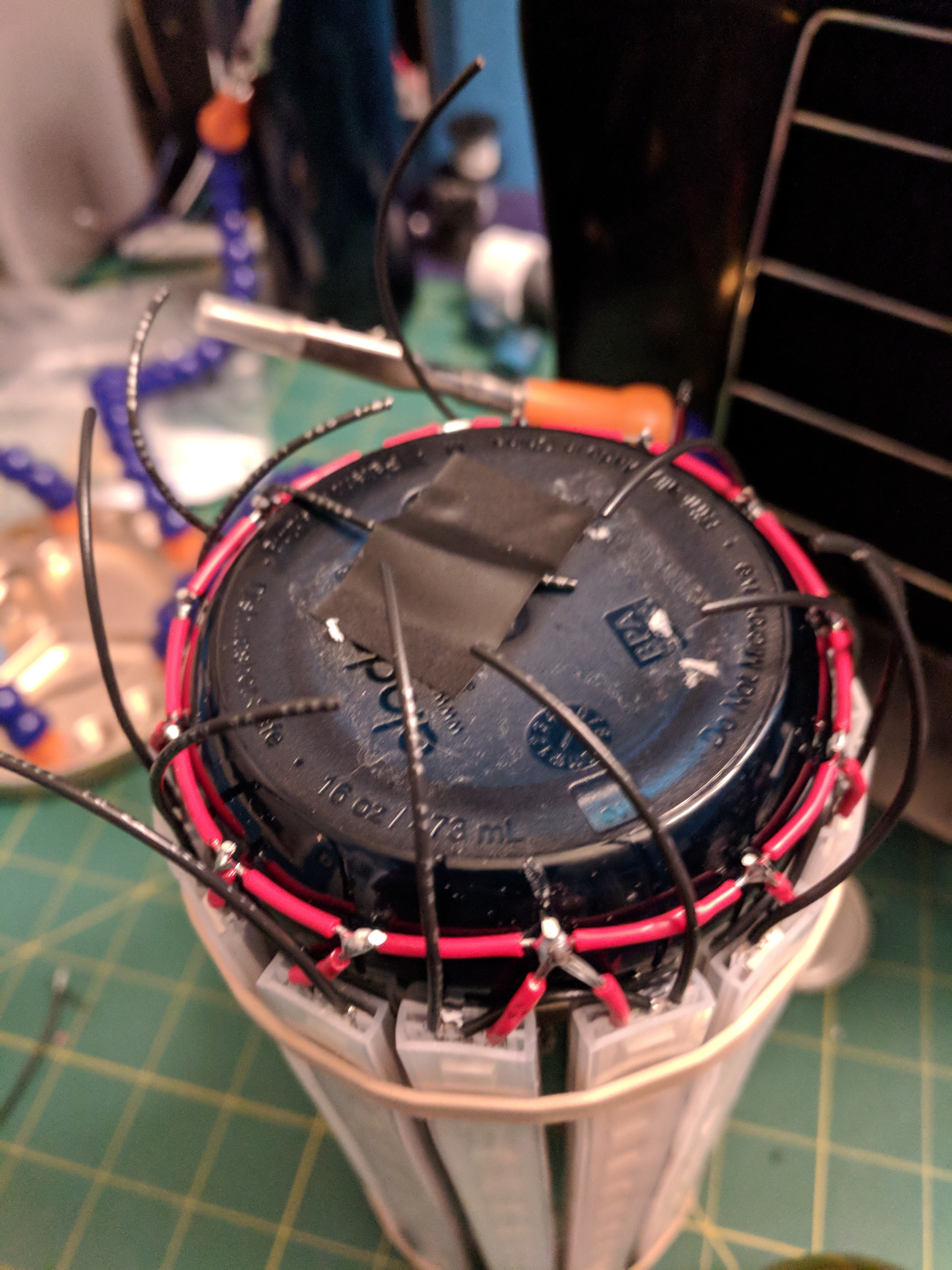 Ground and power rings (not a great idea, as it turns out, but very pretty) 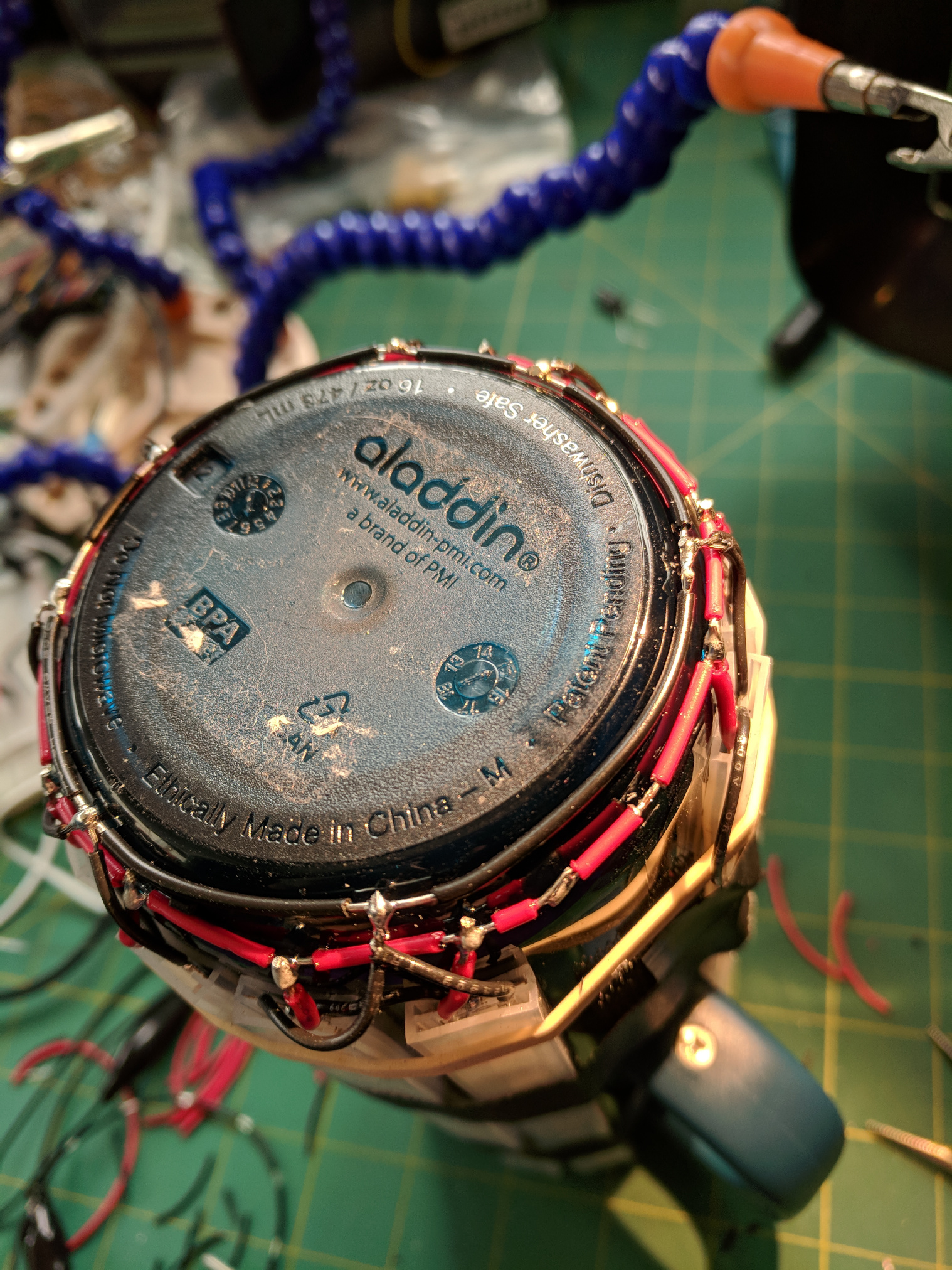 Everything neat and tidy. Exposed connections are sealed with clear coat 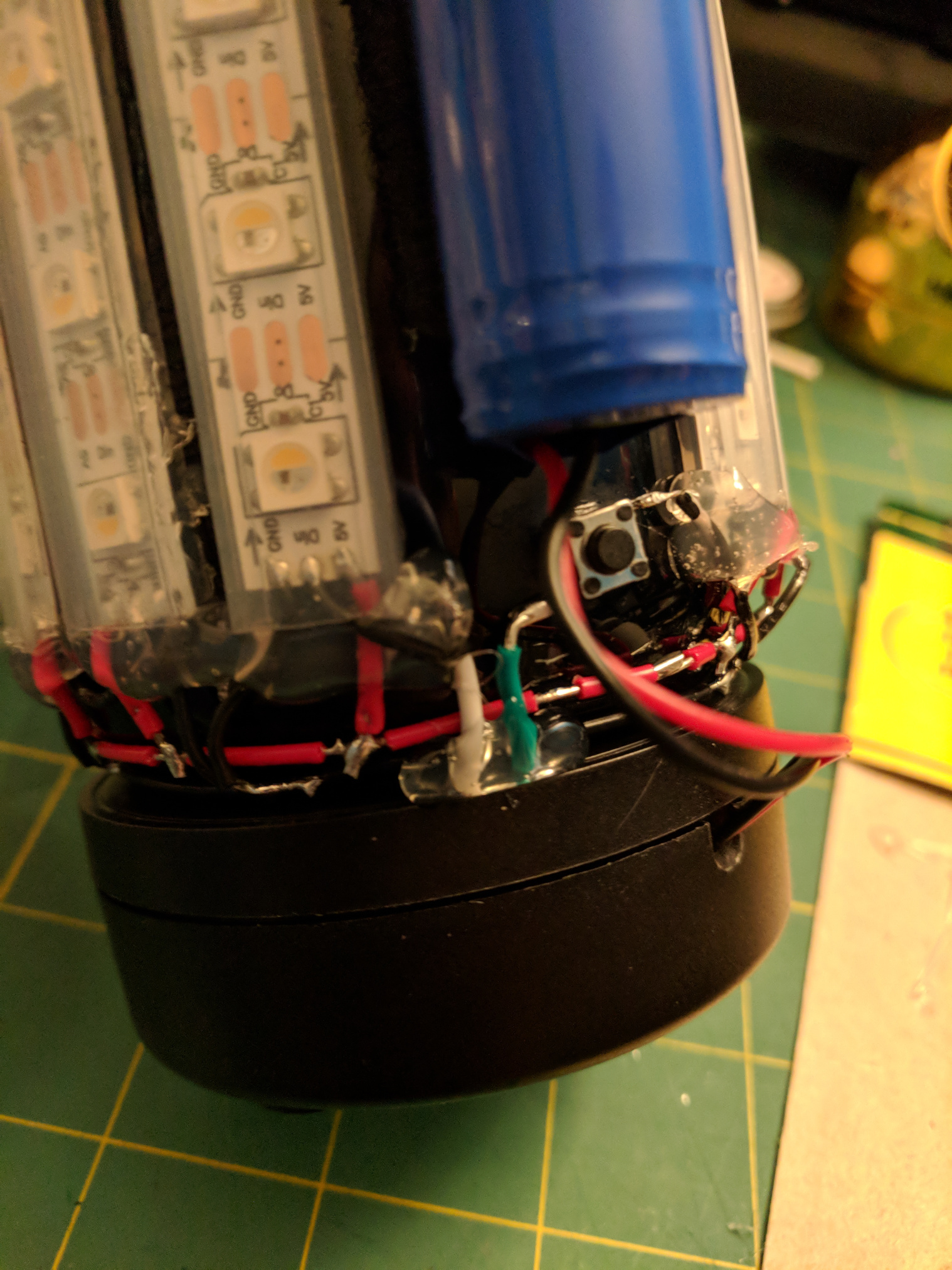 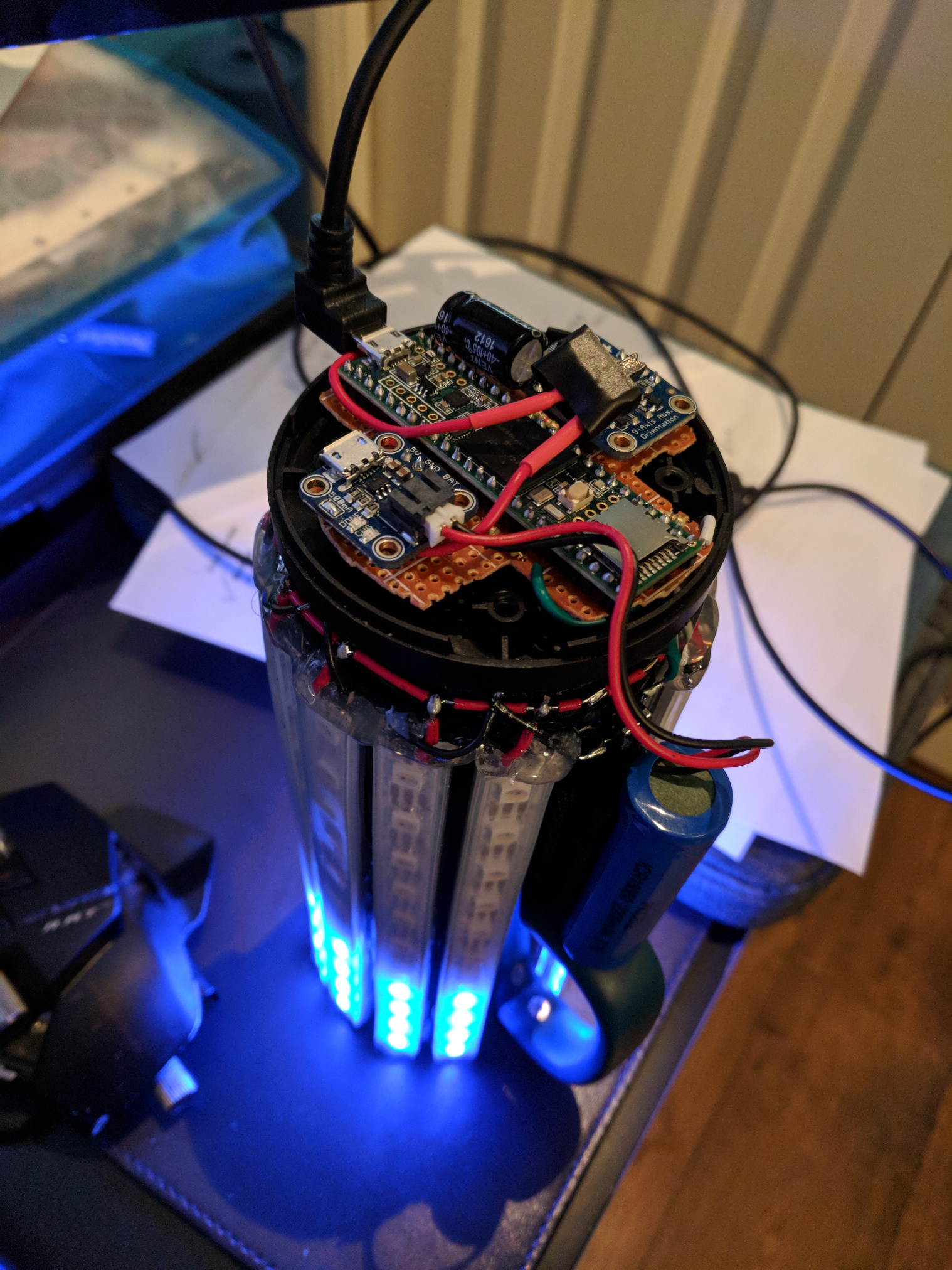 Charging for the first time

I used some of the tools I have around for work to build a simulation of the water bottle before I started in on the hardware design. The goal was to prove that the effect would read at this resolution (142 pixels) and it was a huge success.

This is the first time I’ve done any kind of sim (rather than just a mock-up or drawing) for a project and I’m definitely going to do it again. 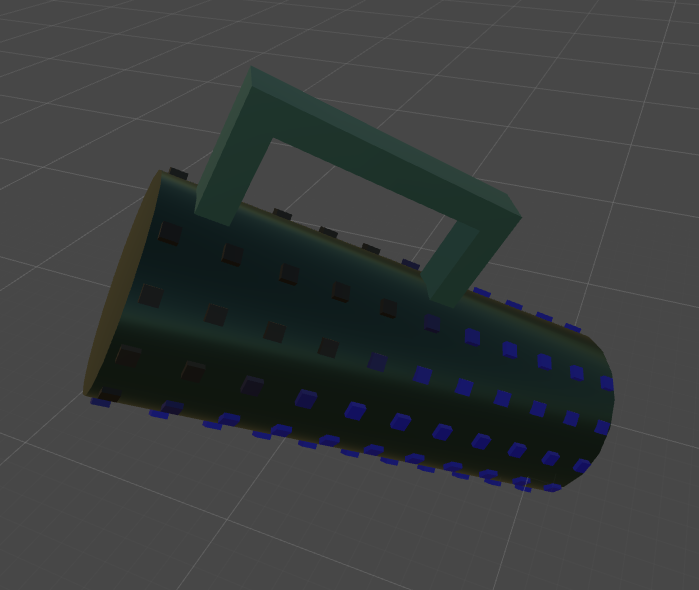 Simulation of the animations in Unity as a proof of concept 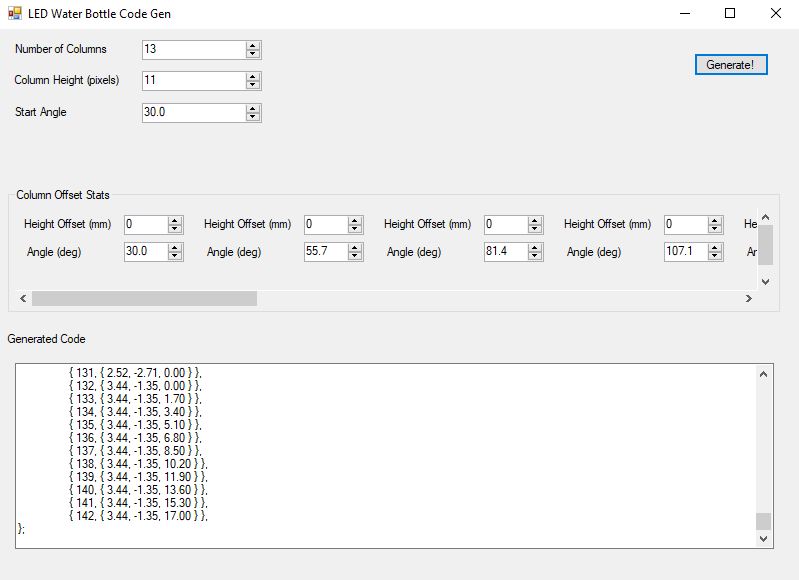 Small utility for calculating pixel positions for the 142 pixels

The final result is remarkably effective. Even though I’m faking the heck out of the fluid simulation it’s just realistic enough that folks can read what it is, especially form a bit of a distance. This project also taught me a very important principle in making an interesting light art object: always have a thing you can show off when people ask questions. In this case, it’s the fact that in certain modes I can tip the water bottle upside-down (with the top sealed, of course!) and the virutal liquid drains out. Watching people’s minds get blown when I show them that, especially if that just thought it was a glowy bottle without much animation before, is incredibly gratifying.

Modes include: rainbow, pourable, auto-refill, and various combinations of those traits. 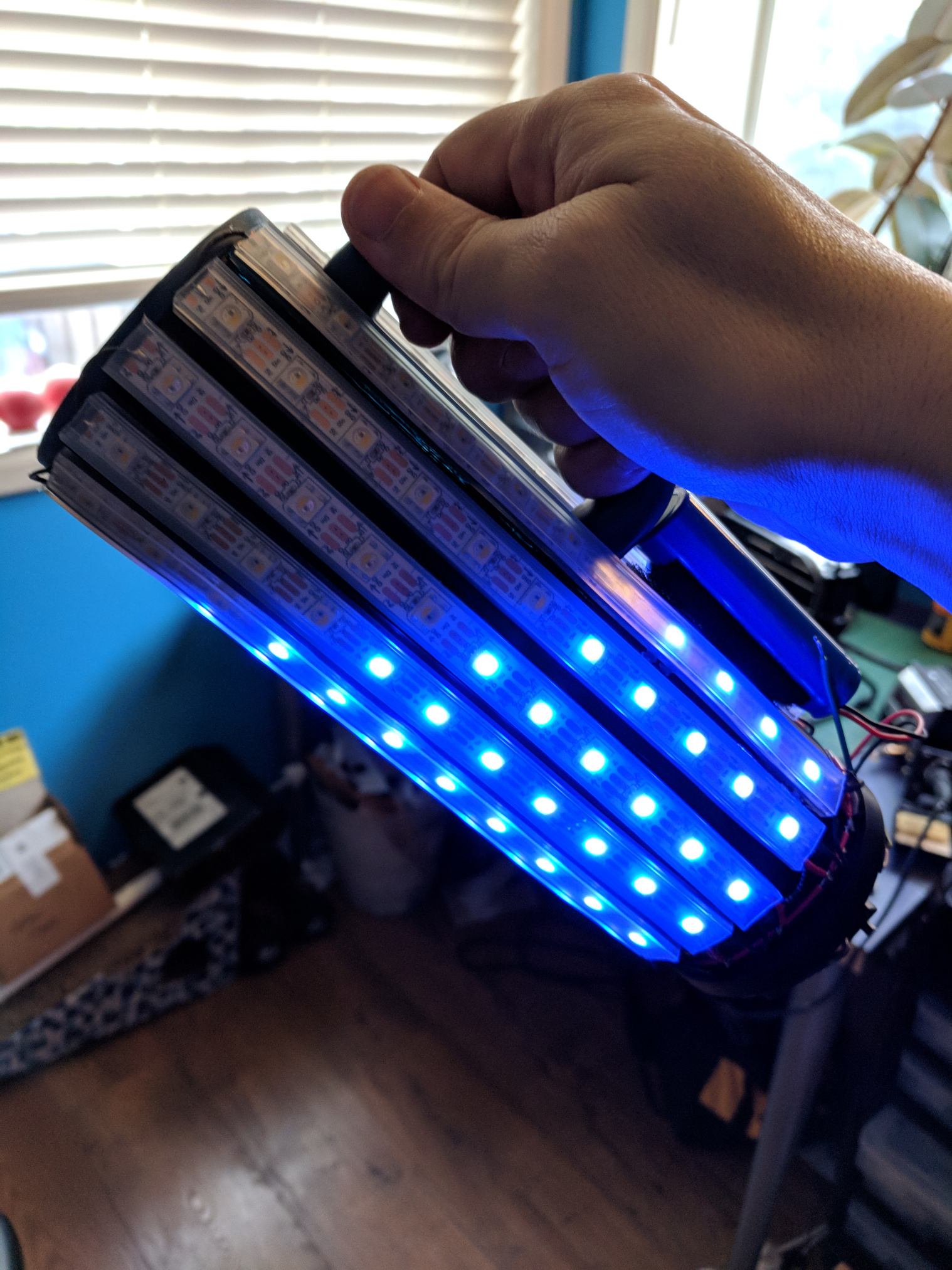 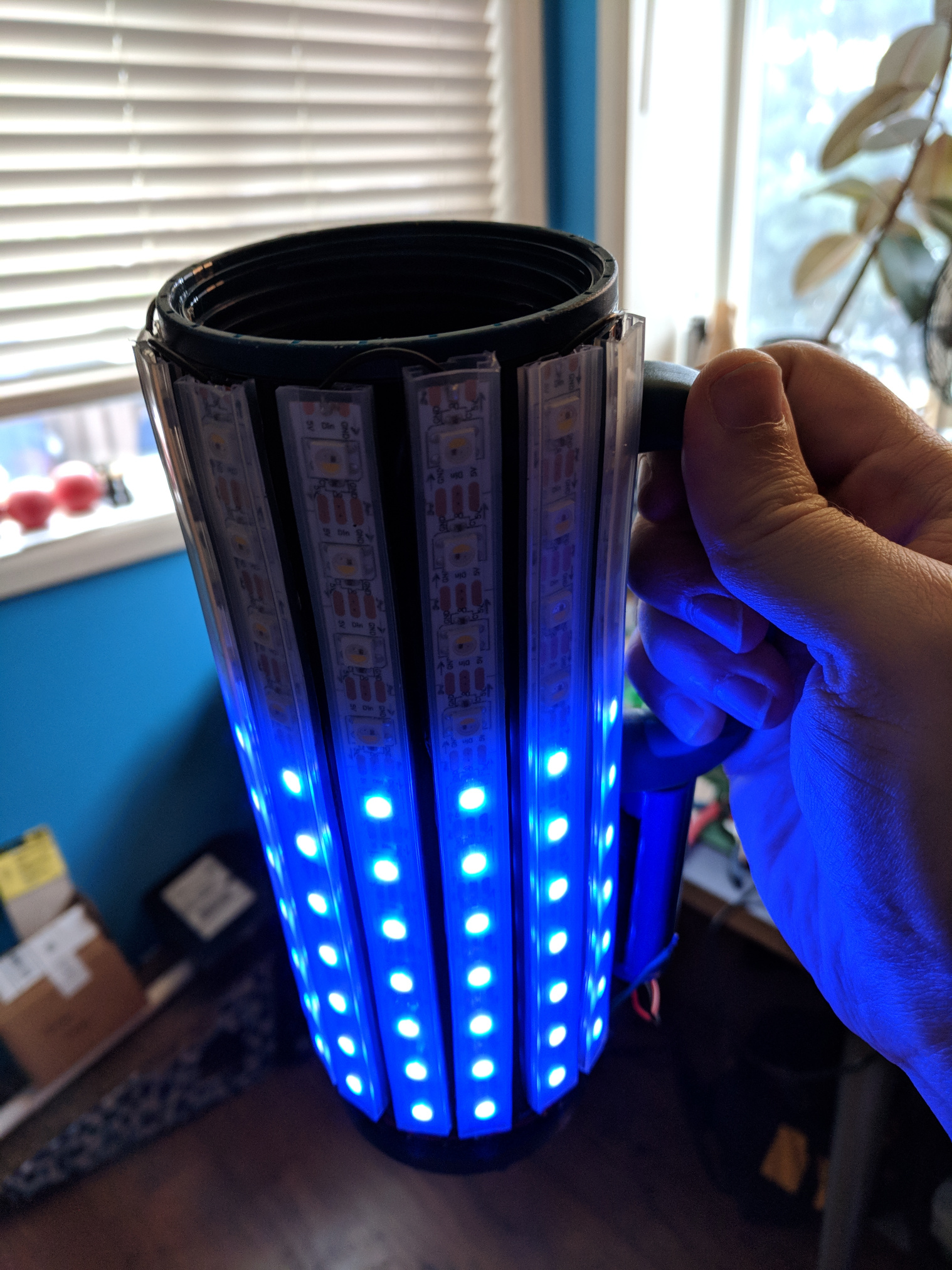 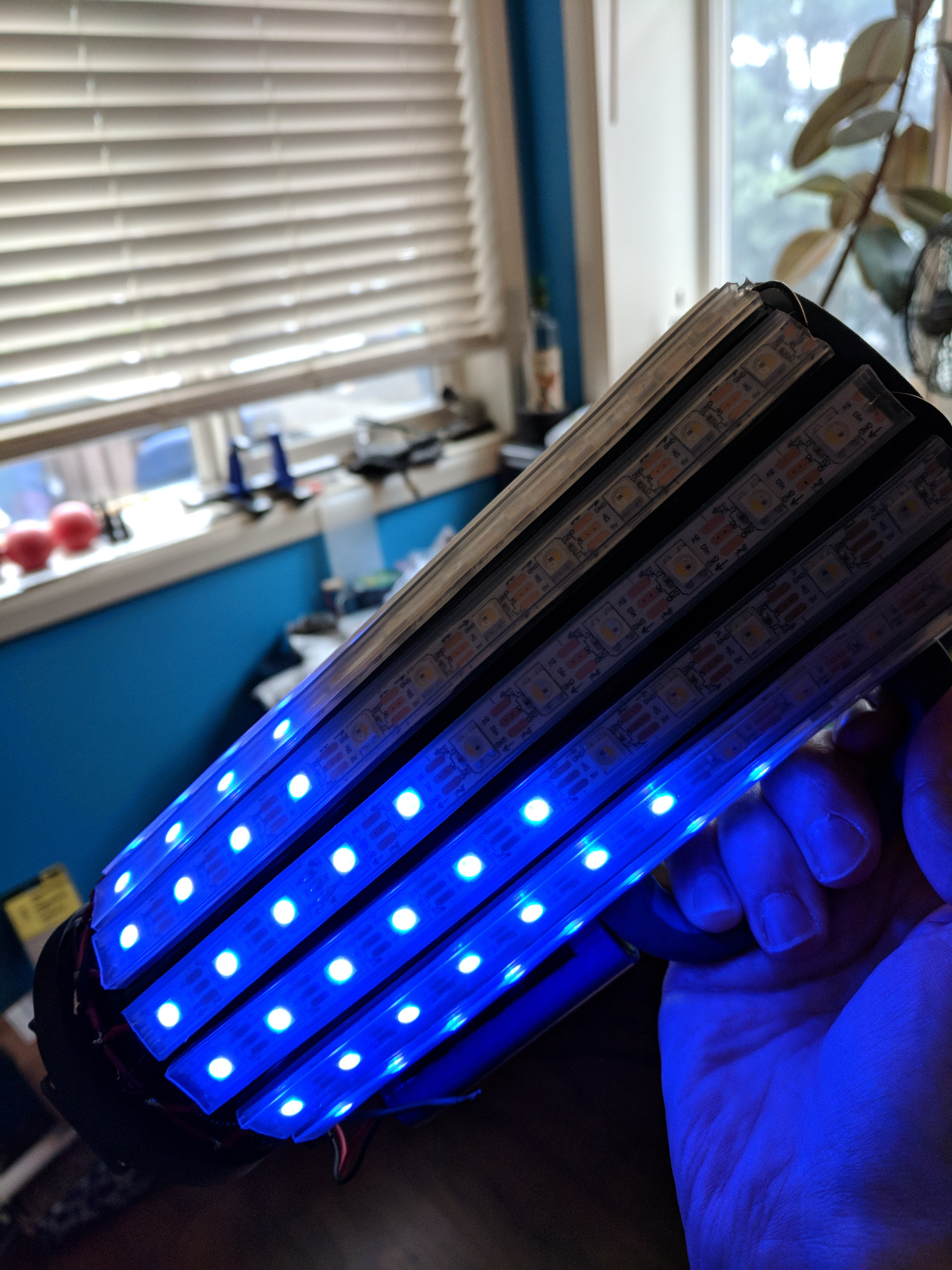 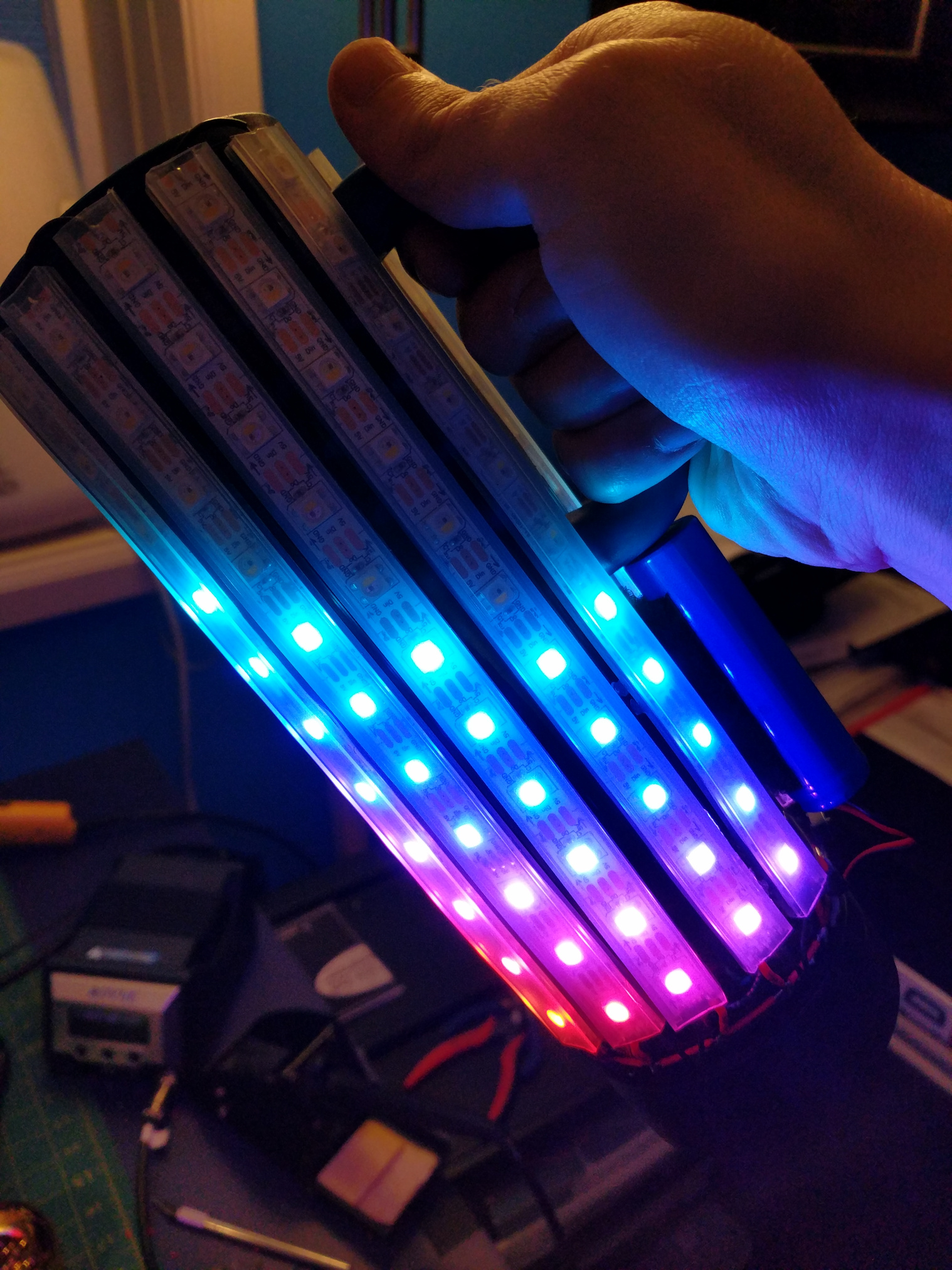 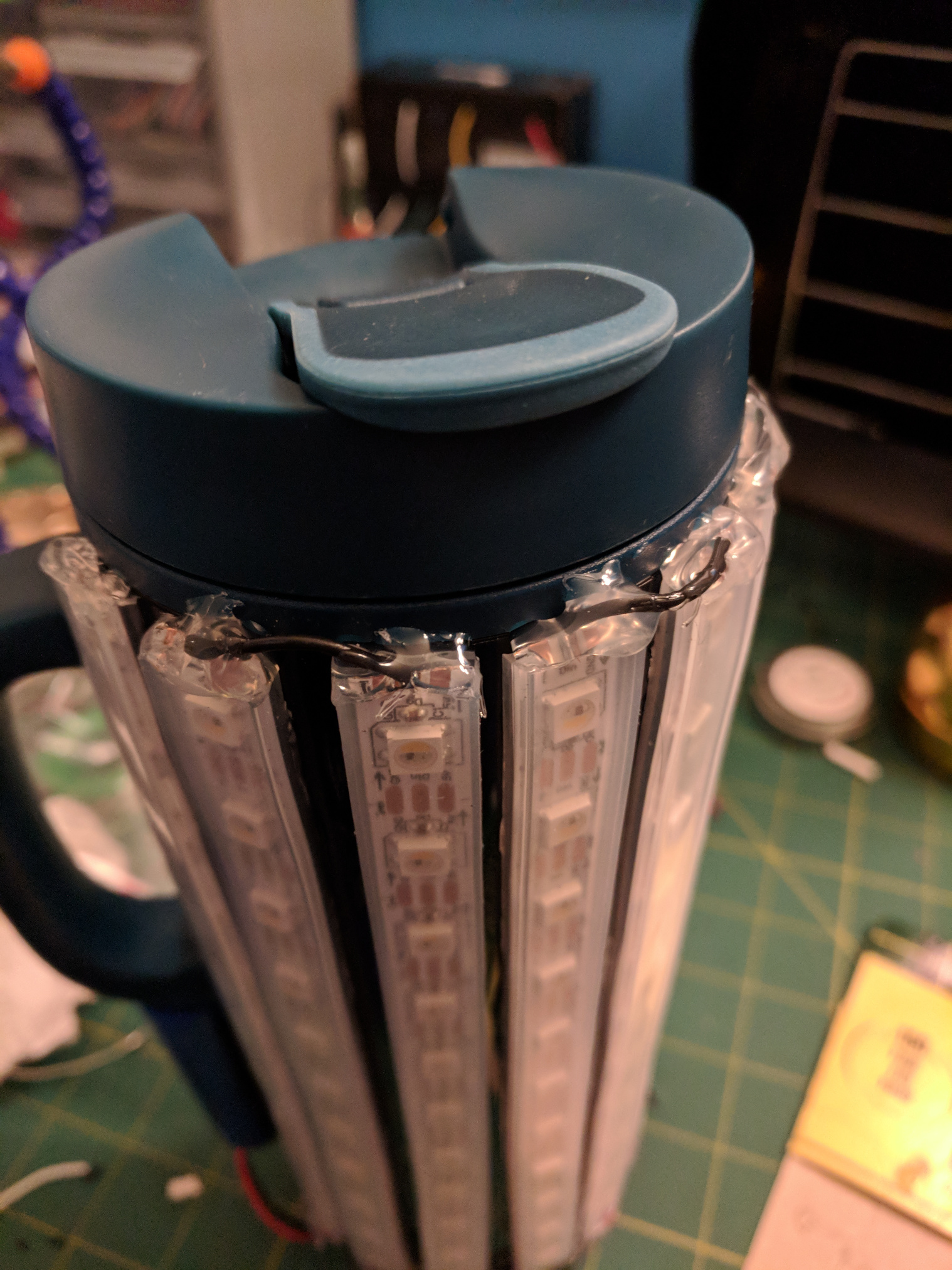